Two-Wheeled Humor  Some funny stories to tickle your funny bone, and a sudden and unexpected appearance by Lucas, the Prince of Darkness.

The Bonnie Ref  A Hyperlink Junkie's Illustrated Field Guide to the 1969 Triumph Bonneville T120R is a treasure trove of info on the classic 1969 Triumph 650 Bonneville motorcycle and other late-sixties 650 unit twins. Look before you have another wrenching experience!

How many nipples does a Bonnie have? We've got you covered.

Hermit's Classic Triumph Technotes Articles with tips and lots of illustrations to help you keep your classic Triumph motorcycle happy and in good fettle. Everything from conquering the Triumph centerstand Super-Spring, to ignition timing and carb-tuning - all with tons of photos.

Classic Triumph Motorcycle Special Tools Sooner or later you're going to need some of these! A complete catalogue of factory and custom tools to work on your vintage Triumph.

One tool you really don't need Breaker - Breaker... Save your money.

Web Resources for your Brit-Iron 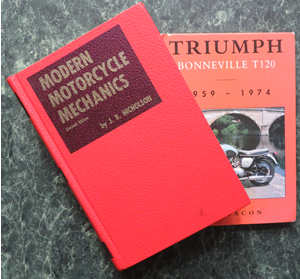 Smith's Instruments Repair Resources What? Your Smith's tach and speedo are on the fritz again? Whether you want to go the Do-It-Yourself route, or take out the plastic, here are resources to help.

Coming soon - Bardfark will demonstrate how to open up your Smiths speedo can using only a concrete block. Nice, Bardfark, real nice! With your usual finess, I'm sure!

Back in the Day

I incrementally broke my mother into the idea of two-wheeled motorized transportation: first with Joe Bickly's Lambretta moped and then a '65 Honda Sport 50.

After that I was home free with a '53 6T 650 Triumph Thunderbird, and from there on to first a brand new '66 Bonneville off the showroom floor of Free State Cycle, and then another '66 Bonnie while in the service of Uncle Sam on Long Island, New York.
First Triumph, First Bonnies

Once, a redheaded girl named Bonnie became attached to me. Another army brat, she'd lived in France. Claimed she spoke French and could teach me how. She'd sing "C'est si bon!" as she pushed me on the playground swings. Summer of '51, Dundalk, Maryland.

When it was time for Bonnie to leave, she kissed me goodbye in the stairwell, probably tenderly. And said we might meet again someday.

Well, I never crossed paths with that Bonnie girl again, but there were a few other Bonnies. Here's the latest. Found her in a barn: Frank's Brit-Barn - Re-kindling the Romance

Mountain Biking in the Greens
Vermont's Green Mountains are a Mecca for hikers and bikers. On my second trip down to the Greens this summer (that would be the one where it didn't rain all the time) I ran across this mountain bike.

Last Ride of the Season (Itinerary) Some years the last ride is a retroactive surprise; our hope for "just one more ride" are dashed. Devastating.

And then there are years like this, when - with snow on the way - even as we surf a wave of warm, sunny November afternoon exhilaration, we already know this is the last time out of the barn before winter. Bitter and sweet.

October 16th, Burke Mountain, Vermont (18 photos) This year marked the Third Annual Burke Mountain Under the Wire Run. Due to scheduling conflicts it wasn't possible to make the trip on Veterans' Day as is customary. Instead, LA and I saddled on down on October the 6th, a glorious Indian Summer day. What a great day up on the mountain!

July 25th, NEK Vermont (19 photos)
A winding ramble down The Gravel from Troy to Lowell to Eden Vermont. Features views of the foreboding mountains of asbestos mine tailings along Mines Road, and a trio of fire engine finds.

Burke Mountain (elevation 3,770 feet, prominence 1,600 feet)
Burke Mountain in Vermont's Northeast Kingdom offers skiing, mountain biking, and hiking, and a toll road that goes nearly to the top. Really great way to reach the peak, but keep your eyes on the road!
No ice on the toll road for this year's Second Annual Burke Mountain Under the Wire Run. Here's the iPod pics.

Fall 2014 Ride Calendar
Gotta get out there and enjoy these waning days of the riding season here during the most beautiful season of the year.

Burke Mountain (elevation 3,770 feet, prominence 1,600 feet)
The First Annual Burke Mountain Under the Wire Run. November 11th, 2014. The toll road to the peak was closed for the season, but Bonnie and I just slipped under the wire.
Half-way up, the toll road was covered with snow and ice so I had to abandon Bonnie and press forward on foot. Needless to say I had the peak all to myself that day and I grabbed these pics for you.

Three Ponds (25 photos)
A return visit to the ponds east of Lake Willoughby on a stunning fall day during peak colors. One of the last of many special rides shared with Bob, RIP. Includes gorgeous photos taken from the Brownington observation tower.

Orleans/Barton/Irasburg
A baker's dozen of photos taken during July around the countryside between Orleans, Barton, and Irasburg, Vermont.

Bonnie Journal 2014
The riding and the wrenching. The agony and the thrill of maintaining the Bonnie.

Thousand Islands NY, September (62 photos)
Photos of Fall 2013 trip across Northern Vermont, Grand Isle, and upstate New York to the Thousand Islands where I met up with my brother Greg and his good fishing buddies Guy and Bill. There I made a sentimental journey on Murray Isle.

Rural Eastern Townships QC and Northeast Kingdom VT
This scenic trip takes you through just over a hundred miles of rural Quebec and Vermont, all on asphalt. We started in Ayer's Cliff, but you can begin anywhere around the circle. The observation tower in Saint Malo and Seymour Lake are of special interest. Takes two-and-a-half to four hours, depending on how often you stop and how fast you go. Hopefully often, and not very.

Graveyard Shift
"I see angels on Ariels in leather and chrome,
swooping down from heaven to carry me home."
Richard Thompson
1952 Vincent Black Lightning When you want to stop and stretch your legs it's hard to find a more peaceful place than a country cemetery.

Country cemeteries are nearly always situated in scenic locations, the stories they tell are universal and limited only by our imaginations, and they provide us an opportunity to reflect upon our own mortality and look beyond ourselves.

Abandoned and Vacant Houses
I just can't resist an abandoned house. Who lived there? Why did they leave? Where did they go? What was left behind?
Open your eyes and ears. Listen closely and you might hear faint whispers of the hopes, fears and dreams of lives come and gone. 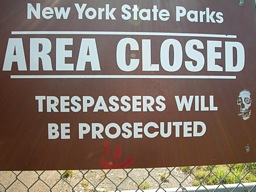 Abandoned Montauk Radar Site
What could be better than an abandoned house? How about an abandoned radar site and a little time travel?

Back in the sixties I spent 3 years stationed at the 773rd USAF Radar Squadron, Montauk Point, Long Island, New York. I worked as part of the team of technicians who maintained the site's FPS-35, then the US Air Force's state-of-the-art long-range search radar set.

The site had formally served as Camp Hero during World War 2. The US Army created an extensive system of underground bunkers there, home to heavy artillery for coastal defense.

Just like the WW2 heavy artillery, the FPS-35 had its day and became obsolete. Eventually the site was given over to the New York State Parks Service, which incorporated it into the Montauk State Park. Today the enormous FPS-35 sail no longer turns under 600 horse powers of electric motors, but it still remains atop its concrete, five-story tower: a rusting monument to obsolescence.

And a challenge to trespassers.

During the summer of 2013 I met up with several other former members of the 773rd for a nostalgic return to the old radar site.

Disclaimer: We hereby disavow any knowledge of 'The Montauk Project'. Rumors and conspiracy theories abound, but Our Lips Are Sealed.

Foliage
Three photos of Bonnie and maxed out autumn foliage. Taken on Chemin McShane, just outside of Stanstead QC.

Flashback to December 2006 - with the tantalizing aroma of roasting turkeys filling the air everywhere, Bonnie and I get out for a 68 mile ramble on Christmas Day! We even saw Santa Claus up on Herrick Hill.

Big Falls VT (35 photos)
Going around Lake Memphremagog is one of my favorite rides. I never tire of the counter-clockwise route. It produces unique and wonderful views on both sides of the border from some of the most scenic gravel roads around.

The 78-82 mile circuit includes one of my all-time favorite destinations: Big Falls VT. Big Falls is situated on the Missisquoi River just outside North Troy. North Troy is pretty much exactly half-way around Lake Memphremagog from Magog QC.

North Troy is also the home of Paddie's Snack Bar. Paddie's is the real thing, an experience not to be missed.

Fitch Bay Views (42 photos)
Some photos on a ride from Georgeville to Fitch Bay to Cedarville to Beebe. Features a stop at one of my favorite destinations - a certain hilltop with truly spectacular views of Fitch Bay and Lake Memphremagog.

Only dedicated back-road riders are likely to stumble upon this spot. The road is marked "Cul de Sac" at one end and appears as a seriously eroded farm road with lots of exposed ledge and mud holes at the other. Not recommended for passenger cars!

Although views from here are great year-round, they are, of course, most spectacular during the Fall, as on this October 2003 ride.

Lake Willoughby (27 photos and map)
Lake Willoughby is truly one of the major jewels in the crown of Vermont's Northeast Kingdom. Here are photos of the Lake during summer and fall as well as detailed descriptions of several ways to get to it from Derby VT and return by way of Island Pond.

Bonnie at the Castle

Includes photos showing range of motion of gearshift quadrant in degrees as well as the use of several special purpose clutch tools.

February 2018, Winter Maintenance Part 3 (12 photos)
Removing engine from frame for a trip to the machine shop and repair to shorn thrust washer locator peg. Also presents the rare opportunity to shine up the bottom side as well as the top. (But how will I know which side to keep up?)

Fabricating an Engine Base (7 photos)
To facilitate the installation of two gearbox bearings in the casing I fabricated this engine base for use on a hydraulic press.

Installing a Podtronics beneath the Battery Carrier (8 photos)
I used a couple of tie-wraps to fasten a Podtronics regulator/rectifier beneath Bonnie's battery carrier. 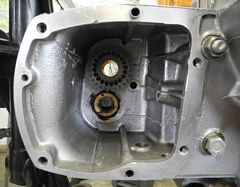 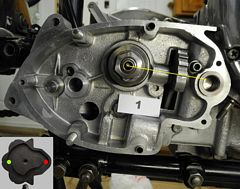 Camplate & Quadrant Indexing.
A photo-illustrated description of indexing the gearbox camplate and quadrant in first gear, fourth gear, and neutral between 2nd & 3rd.

January 2016, Top End Tear-Down (15 photos)
Leaking pushrod tube seals caused Bonnie to get pretty crudded up during the season. Fixing that meant pulling off the head so logically it was the right time to refresh the top end.

April 2016, Gearbox & Transmission Work (14 photos)
Having finally obtained a brand new, high quality main shaft, it was time to delve once more into the gearbox. In addition to installing the new main shaft, I replaced both needle roller bearings, the only ones not renewed last year. Last year's clutch and transmission re-build was holding up wonderfully.

May 2016, Top End Re-Assembly (21 photos)
Putting it all back together after an .080" overbore, new pistons and rings, and valve work. Soon to be on the road again.

2015 Tear down (15 photos)
As well receiving new electrical wiring, Bonnie's transmission and gearbox are getting a going-over.

2015 Tear down, Part 2: Gearbox Blues
While the new wiring system and transmission are working great, problems plague the gearbox. 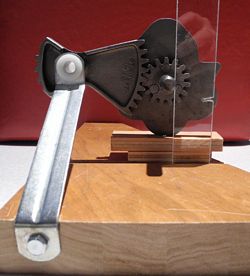 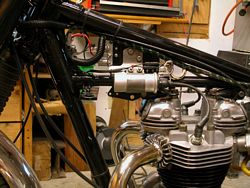 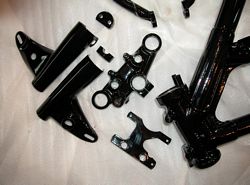 Engine Removal using Chain Hoist - 2004
Removing and replacing the engine from/in the frame of a 1969 Triumph T120R using a chain hoist to do the heavy lifting.